Lucky has been growing into a very confident boy. He goes with my mom for hour-long walks around the park every morning and has been making friends with the neighbourhood dogs. He has his favourites that he is very happy to see and others to whom he is polite but aloof! He gained rather a bit of weight over the winter but is 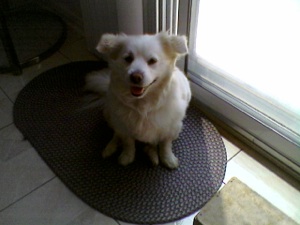 slimming down with the increased exercise since it has grown warm. He is quite happy to spend the early part of the morning in the yard but we call him back in when it gets warmer. He had his spring vet visit and was recommended to have his teeth cleaned; fortunately, beneath the tartar, his teeth were in very good condition and no extractions were required. We’ve been offering him rawhide toys to help him clean his teeth but he hasn’t shown much interest in them. We think we may need to begin brushing his teeth.

Lucky still hasn’t overcome his aversion to cameras.  I snapped this picture with my camera phone but as soon as he heard the “shutter” sound, he realized it was a camera and turned away and I couldn’t get another picture.

We trimmed his fur to help him keep cool and he seems quite happy with his new hair cut!

Just dropping a line to give you another update on Trevor/Lucky. He seems to have really taken us as his own and become more confident. In contrast to how he is now, he was quite subdued during his first few weeks with us.  Nowadays, he walks about with quite a bounce to his step, head held high and tail always wagging. He has become more protective of the house and has started barking to announce visitors (just one or two soft woofs and then he quickly settles). Perhaps now that he feels more secure, he is enjoying time alone in the backyard (it could be that having been abandoned previously, he didn’t used to like being outside without his people in sight).  We took him with us to a small Christmas gathering and he was a most well behaved dog, just soaking up all the attention everyone lavished on him. We bought him a coat and booties for the winter but he is not one for getting dressed up. We’ve discovered that he absolutely loves baths!–it must be just like one long session of petting and rubbing!

My mom found the name Trevor quite difficult to say and so we renamed him Lucky. He has settled in quite quickly. He is a very trusting fellow–by the third day, he was sleeping on his back with his legs in the air! He doesn’t seem to care much for spending time in the backyard but he loves to go for walks around the neighbourhood–he finds piles of leaves fascinating and will stick his head into them and sniff all through them. He has adopted the larger of the two stuffed animals you gave us as his special bedfellow; he arranges it as his pillow in his dog bed.  He seems to understand that we prefer him to not be on the furniture but he is quite the little rascal, sometimes sneaking onto the sofa at night to sleep 😀 We think he might have had some negative experiences with men in the past as he barks at all male visitors (but welcomes women with a wagging tail) but he doesn’t take long to come around; my husband had him lying at his feet for a full on body rub within half an hour. He (Lucky, not my husband!) loves to be rubbed and talked to–he looks right into your eyes when you talk to him.

Lucky has become quite attached to my mom, following her around the house and sitting by her. Part of the reason for adopting him for my mom was because my dad passed away during the summer. Lucky has really cheered her up.

You were quite right about him being camera-shy. I haven’t been able to get any good pictures of him!