Our little dog is doing well. We have re-named him Henry, as Addicus was a bit of a mouthful for such a cute little guy. He didn’t seem to respond to his original name anyway, so we figure he won’t mind. 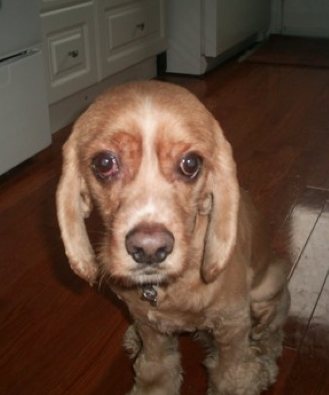 He is very sweet.  As we were warned he is always with us. When he isn’t eating or playing fetch with his “stuffy” he is usually wherever we are. Actually, he is usually on our feet when we sit and watch TV. He hasn’t had any accidents and we haven’t seen any kind of misbehaving. He walks well on the leash and he enjoys the walks. He was friendly to our neighbor’s dog when we met on the street last night. He is eating well and seems to be doing okay. We give him lots of hugs and pats and kisses so I think he enjoys that. He is totally ignoring our cats (which offends them I think – they want to throw a hissy cat-fit and he couldn’t care less). He wants to sleep on our bed at night, but we’ve been successful in getting him to sleep in his own cozy little dog bed the last two nights. It is about 6 feet away from us and flanked by two giant stuffed animals for company. Once he realizes that he’s not going to be allowed on our bed he settles down in his little bed and we don’t hear a peep until the morning when we get up. 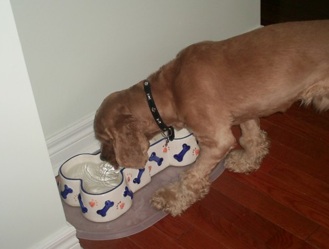 Anyway, we just wanted to let you know that things are going very well and everyone at our house (except maybe one of the cats) is happy with the situation.