Remember Fox, the feisty little pomchi who was fostered in Toronto and came to live with my daughter and me in a triplex on Poplar Plains Rd in 2008? Fox had a rough start in life: I think we were his third home. He was approximately 4 by then. Someone from the shelter he was in took him home to help him get used to other dogs and learn English commands, as he knew only Portuguese.

After a couple of days and fear bites, Fox began to calm down a bit, though he only became really mellow with dogs and new people the last five or so years of his life. He was always so much fun with those he was at home with: what a grin he had when playing tag around the house! And so devoted to me, showing such love in his dear brown eyes with the blond eyelashes!

When I moved to Hamilton, Fawkes (I modified his name a touch, lol) got a nice big yard to chase squirrels in. About 2014, we found out through a regular checkup that Fawkes had a heart murmur. It stayed in the background till about 2018 when tests showed he’d need meds. That went well too till the middle of last summer, when the Fawkester started slowing down and by the end of summer, wasn’t at all himself, especially not dancing around when chicken was on offer. By the start of Labour Day weekend, it was clear he hadn’t long, as organ failure had set in.

With the help of our vet, we were able to hydrate Fawkes ourselves at home and care for him in his last hours, which were mercifully peaceful, and in the early hours of Labour Day, Fawkesy very quietly slipped away to the

Here’s the photo I shared with friends to mark Fawkes’s passing, and a super cute one as well. If you post any part of this notice, please pick whichever photo you like. I am so grateful for the 13 wonderful years we had together, thanks to your dedication in giving a young dog another chance. All the very best! 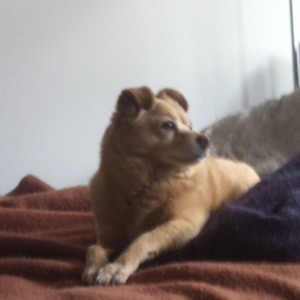